Getting off the train

Given the nature of these awards, as they are circulating around the blogosphere, I am going to take the liberty of changing the rules—or, rather, breaking the chain.  I am simply going to thank my dear blogging friends for the recognition. I am genuinely touched that they would recognize me in this way.

I have expressed before how much I enjoy Pablo’s blog (http://pablobuitrago365.wordpress.com) and how much I have gained from our interaction.  I have noted, through his comments not only on my own blog but on countless others, the great care he brings to the observations he makes about other people’s photography.  He is an outstanding photographer whose daily posts display not only his photographic skills, but also the intellectual curiosity he brings to his subjects.  I always look forward to his posts, and I’m sure you will, too.  Pablo, thank you so much for nominating me for the Versatile Blogger Award.  I admire the enthusiasm and the wonderful spirit of inquiry you continue to exhibit with each passing day.

I was surprised, and I must say, incredibly flattered to be included among the nominees of George for the Liebster Award.  It was only just recently that I came upon her blog, and from the moment I read that first post, I knew I had stumbled upon something, or rather someone very special.  Her photographs will draw you in before you even read the first word.  Then, when you start reading, you’ll discover a voice like none other.  The authenticity and originality of her voice seem to permeate her photographs.  (How does she do that?!)  She tells it like it is, and then some….  From what I’ve seen in the short time I’ve read her, this is a quick-witted, intellectually fearless, utterly charming woman who gets it. There is no one else like her on WordPress. Check her out:  http://gweaverii.me/

And now for a few final photographs from my railway adventure.  There is nothing special about the photographs, in fact the photos themselves have all kinds of problems (exposure, composition, etc.) but you can’t explore an abandoned railcar without running into some graffiti. What I like about these is imagining the scene on the railcar where these were painted:  the railcar is  located quite near  the women’s college where I teach…  These will be the last in my series from this week.  I’m getting off the train now. 🙂 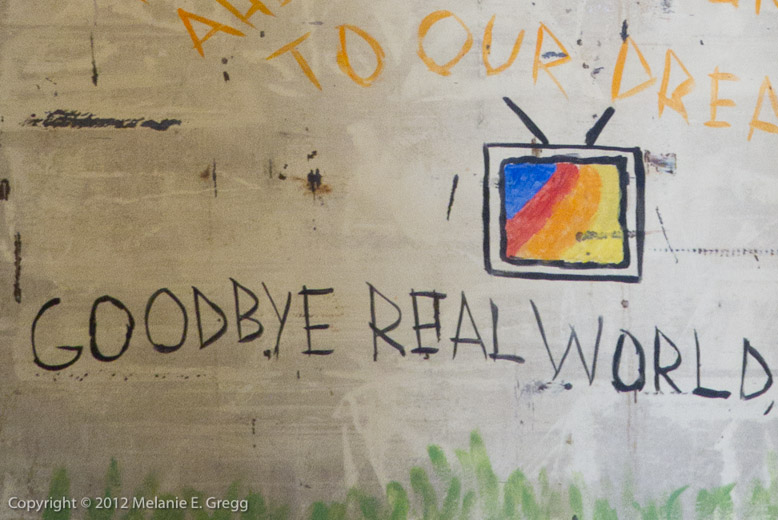 This entry was posted on February 11, 2012 by Lemony. It was filed under Pennsylvania, Railway and was tagged with Graffiti, Panasonic Lumix LX5, Photography, Railcar.